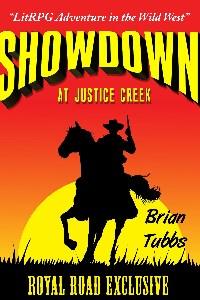 "We can't get your brother out!"

A bookish history teacher must rescue his younger brother trapped in a virtual reality MMORPG set in the American Old West.

Showdown at Justice Creek is an action-packed novella in the LitRPG genre. For anyone who might be unfamiliar with the genre, LitRPG stands for Literature Role-Playing Game and it’s all about following fictional characters through a high-immersion, virtual reality ‘world,’ specifically a massively multiplayer online role-playing game (MMORPG).

The storyline and characters are fictitious. Names, characters, businesses, places, events and incidents are either the products of the author’s imagination or used in a fictitious manner. Any resemblance to actual living persons or actual events is purely coincidental.