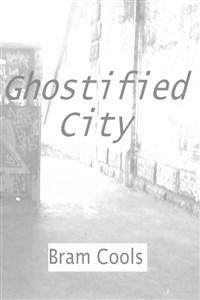 ‘Ghostified City’ is a post-dystopian sci-fi tale by Bram Cools, and also his first full-length story in English and not his native language Dutch. The story is set in a world that could be a future version of ours, at least if we as a species turn out to be unable to work out certain problems present in our current societies. The story is told from the viewpoint of Adaman Yimmand, a simple factory operator in The City. Working with robots and machines every day, he doesn’t even realise that he might not have met another actual human being in years. Everything begins when he breaks his routine for once and enters a bar where he meets Evelith. This pesky other person does not let him go after he has had his -rather terrible- beer, because according to her actual humans are much rarer than he’s aware of. And from then on ‘the genie is out of the bottle and won’t get back in’, to use her words: Adaman meets more people, like the living anachronism Leste who is a specialist in projecting ancient music and 3D-videos, and the old janitor Velia who is so much out of touch with the reality of the City that she even knows how to make mint tea from actual plants. Gradually he has no choice but to accept that the reality of The City is not what he always thought it was, and to face the darkness of a fading humanity that’s running out on autopilot.Is there any hope left for him, and for his species?
(I have selected 'sexual content' and 'traumatising content' to be on the safe side, because there is a stripclub-like venue in the background of the story, and an almost-extinct humanity that has institutionalised suicide. Apart from that it's not really a heavy 'adult' story.)