The Overlord is running out of Internet Data 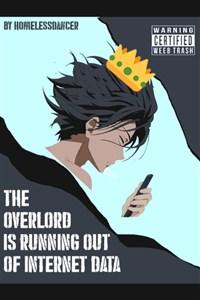 Alex Dcosta was your typical isekai protagonist who finds himself waking up in another world. He finds himself in the body of a young boy with totally badass powers.
But soon his joyful moment last until he realizes in this new magical world, there was no internet and quickly succumbs to despair. He realized the fact that he won't be able to continue to watch his favorite anime series and falls in depression.
Just when a mysterious being makes a contract who gives Alex back his smartphone from the earth realm.
But there was a catch, to stream his favorite anime he needed internet but there was none in this fantasy world. Hence there was an app installed in the phone itself which had certain quest posted in it.
If Alex was able to complete a certain quest from the app, he would be awarded internet data which he can utilize to stream his favorite anime. The difficult the quest, the bigger internet data.
Join Alex, a hardcore weeb who transforms and bends this fantasy world to his hobbies. Also for some reason, the gods of that realm were out for Alex’s blood.