A Knight Of Humanity 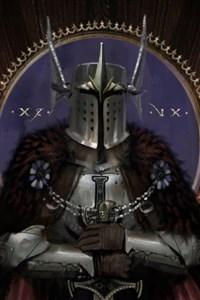 In the past, there was once a time where humanity had thrived and lived in peace, but then one-day humanity had traveled across the sea to the Forbidden Land, a place where they were told by the Gods not to go ever. Upon arriving at the Forbidden Land, humanity came across all kinds of creatures. There were some who were very similar to humans, and some who were nowhere near close to looking like humans.
At first, humanity had tried to become friends with these beings, for one of their thirteen Gods had taught them not to judge others and to treat others as equals. Unfortunately, this attempt to coexist with one another didn't last long, and soon humanity had found themselves at war with them.
Now, it has been fifty years since the start of the war, and humanity has only a handful of kingdoms left. What was once a prosperous race is now a shadow of its former self with nowhere to go. However, hope has not been lost yet, for humanity has seven of the thirteen relics their Gods and Goddesses bestowed upon them one day. This is a story about a young knight named Daemon, the wielder of the seventh relic.
This is my first attempt at an original fic, so I ask you not to have any high expectations for me. I do not consider myself to be a grand writer, if anything I barely consider myself above average. I write when I have time, and I won't ask for any money or anything like that. The only thing I hope to get from you guys is a smile, besides that, I don't want anything else from you. I also wanna say that I consider this work to be 2D and not 3D. However, you're not obligated to look at it like this, and can view the world however you please.
The cover photo is from the video game called Dragon Age Inquisition. I may have purchased the game, but I do not own this piece of art. The ones who own it are Bioware and everyone else who made this game.