Of Kingdoms and Empires 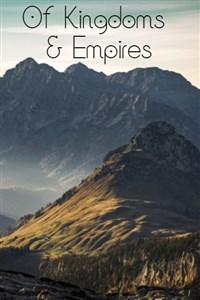 A burst of cold air blew through the room as the door swung open. A man stood in the door inspecting the room as the wind howled behind him. The room was a typical inn's common room, complete with old wooden construction, a roaring hearth, and the smell of booze in the air. As for the man, he was young with a dark cloak and a case of some sort slung over his shoulder. The door swung closed behind the man as he made his way to the hearth. Once he got there he perched on a stool, bent over, and unclasped the latches on the case. He gently, almost reverently removed the lacquered spruce lute and set it on his lap. As he began to tune the noise of the common dulled to a whisper as everyone leaned forward to hear, for they recognized the man, and it was not often to have such a famous bard perform for free. The silence was suddenly broken by a single chord, loud and free. As the chord slowly faded the bard began to sing,
Listen well, men young and old
To this tale not often told
Of Kingdoms and Empires
And a man who lived two lives
A man who strode through chains and fire
And changed the world
For good or ill, I do not know
Listen well, for this is the Tale of Virgil Parr