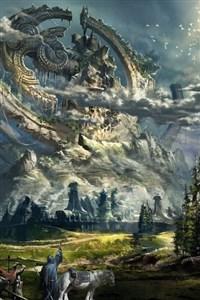 Laverne Avril Hart, a former daughter of the Noble Hart Family, was thrown to their Empire's Bordertown after being disinherited of her rights to remain in the family due to not having enough affinity to cast their Family's magical signature Flame Art. After being thrown, Laverne wasn't welcomed by the common folk and was instead scorned with contemptuous gazes, which made her live the rest of her life on the outskirt of the town alone...
That is when she stumbled upon an odd looking metallic spire somewhere in the forest. And within that metallic spire, lies the fate of her life. Awakened from her interaction, the being stumbled out of the spire.
The journey of the World Builder begins from her fate.

//
Cover: The image used as the book cover is not mine, nor is it a picture I have commissioned to be used by me. I found it within the google images through searching 'Royalty free images'. Should the original artist requested to take the image down, I shall do so without hesitation. As such the image a place holder only. I have commissioned for a cover image so there will be no need for the current cover art to retain after I receive it. Thank you for understanding.
Chapter Release: Not to be conflicted with Magical World Domination, but randomly as well.Chapter Release Frequency: Due to the nature of this Novel, being longer than Magical World Domination, it will be at Abysmal at most.
In regards to Grammar, my first language is not English and I am just starting out on 7th grade this year, so pardon me if some lines are inconvenient to read. Roughly this novel is all about me being ambitious about my skills and wanted to create my own story.