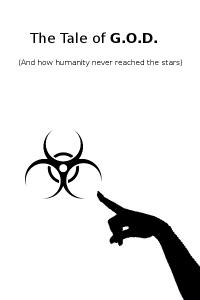 This is the Tale of G.O.D. (And how Humanity never reached the Stars)
Antioch is a sheltered being and knows little about the world. Although he harbours his own secrets, he doesn't comprehend the scale of the adventure he is about to embark on. Being locked up in a research station, he is content with his fate, but when he starts receiving strange messages, he suspects that not everything is well in his little world.
When it's abruptly decided that the project has to be ended, Antioch is faced with the large world outside his prison.
He won't like what he finds... and there are powers at play who would love to put the escaped subject back into the box.
But as in so many tales, it's hard to close Pandora's Box once it was opened.