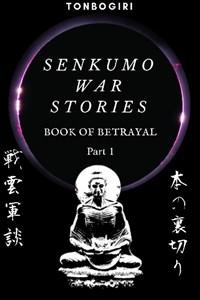 Those few minutes seemed like an eternity. Everyone was so desperate to save Noriko, to save her child and atone for the grave mistake committed in the Senkumo name. But as the minutes continued to pass, there was less and less anyone could do for her. Tsukiakari soon found herself to be the only one still trying, while the others all refused to even look at Noriko’s colorless face. Tsukiakari took a good look at Noriko, her lifeless face and her battered, violated body. "Gekko...she's gone."Book of Betrayal continues the harrowing tale of the Senkumo clan and the horrors Tsukiakari endured during the Warring States era of Japan. It begins with the Rape of Noriko and the subsequent massacre of her village, heinous crimes committed by Tsukiakari's own men. Forced to conceal the atrocity from her Ashikaga allies, Tsukiakari has the perpetrators executed and the bodies dumped in the Katsura river. Her efforts to preserve peace between her clan and the Ashikaga proved forlorn. As it turns out, dead men do tell tales. Tsukiakari finds herself embattled by new and old enemies, and hated by men and phantoms alike. War begins to rot the senses of everyone around her, turning good men and women into vengeful husks of their former selves. Her fight to establish her clan as a sovereign state becomes bloodier and more heartbreaking than she could've ever imagined, as the madness of war begins to affect her dearest friends.In Book of Betrayal, the leadership of the Senkumo clan reveal just how far they're willing to go to forge their new nation, even it means turning against their fellow Senkumo. Meanwhile, Bishamon all but disappears from the clan. His communications with Tsukiakari grow sparse, and his true intentions behind establishing the clan are questioned. With their master gone, Tsukiakari and her clan find themselves all alone in one of the most violent eras of Japan's history, with only their goal and their most determined enemies in sight. Thus begins a tale of secrets, phantoms, and ultimately, betrayal. The question is, who among the Senkumo will survive to see this era of strife and war come to an end?