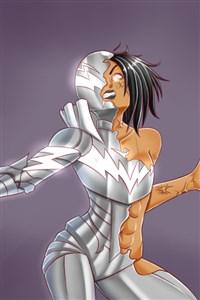 Most people have problems with their parents. Anna had it worse than most, with her mother being the most powerful super-being on the planet. At least, until Anna awoke her own power. Joined by Jordan and Rick, peers with powers similar to her own, the three set out to fight the ills of the world. Rebecca seeks to shield them, the Supreme United Nations wants to weaponize them, and sinister alien intellects seek to control them. The Lightning Brigade want none of it. They fight for humanity, against the unseen horrors lurking beneath the surface and the monsters that await beyond the stars. Manipulators and deceivers on all sides, Anna, Jordan and Rick find they only have each other to trust. This is the start of their story. Join them, won’t you?Ignite your soul! Fight, Lightning Brigade!Updates twice a week, Tuesdays and Saturdays