Demon of the Mind: Cannibal 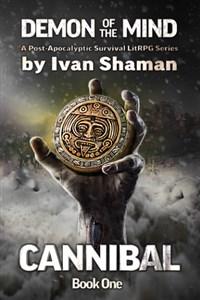 An act of terror eliminated civilization. Ninety percent of all adults died, and nine percent became zombies—whose brains were slowly recovered by nanites. Only one percent stayed human. Life had been turned into something resembling a computer game, where levels were increased by absorbing the nanorobots from other’s bodies.
Presumptuous mankind had destroyed itself, but it might still be reborn in a new form, with a new meaning, with the sole Sun, and with the new God – the Supreme Mind.