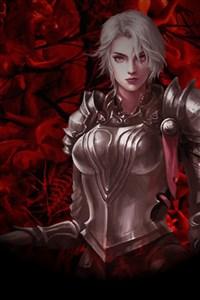 Both famous and infamous, The Scarlet Champion and her companions became the stuff of legends. Revered as heroes and cursed as villains, they made their way through the entire continent looking for either adventure or trouble, slaughtering those who would dare disrespect them and having a jolly good time all the way through.
Sometimes praised by the locals while other times leaving behind a path of destruction, they could only be described as an uncontrollable chaotic force, a walking and talking natural disaster of sorts.
"What the hell is wrong with these people, I mean they sound batshit crazy, you can't just go around breaking stuff and call it f-"
Anyway...
The Scarlet Champion used many names and had even more nicknames, but the truth is that before she started forging her own legend, she was an outsider. Although her body was always of this world, the consciousness residing inside was not. Born in a faraway place, his soul migrated into this world seemingly by pure chance... or there is also that thing people believe in called destiny. Whichever you choose to believe in is fine.
**This is just something I'm writing in my spare time to practice my English and expand my vocabulary (as I have to constantly google a shit-ton of words, there is a high chance I will remember some of them). I haven't written anything in my life, thus I'm very open towards tips and criticism from any veteran amateurs and I hope to improve as I keep on writing :^))