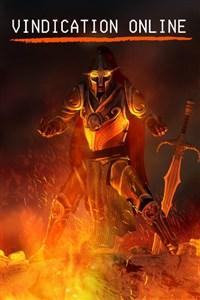 Dead men tell no tales...
But they can still level up.
Jake Lynch used to be one of the world’s foremost gamers, the ultimate combination of athlete and nerd in an era where physical ability is married with technology in athletic immersion rigs.
Until he finds his wife murdered in their mansion.
Framed as the killer, Jake has spent the past three years languishing in a prison cell with nothing but vengeance to keep him company.
Now, Jake's stay on death row is about to come to an electrifying end.
And he's looking forward to it.
For Jake, death means freedom -- a chance to continue existing as digital code in Vindication Online, a virtual MMORPG created just for death row inmates like himself. Jake's debt to society doesn't end with his mortal existence -- he's doomed to fight forever in Vindication Online as a computerized gladiator existing solely to entertain the masses.
There are worse trades.
As long as Jake is self-aware, there's still a chance he can find his wife's killer and make them pay.
Death is just the first step in revenge.