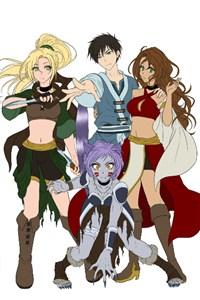 If Jake wins the local Fantasy Tactics Online tournament, he’ll have everything he’s ever dreamed of — a ticket out of town and the attention of a beautiful woman.
However, this woman has more planned for him than a bus ride to the local metropolis. She teleports him back to her Realm and declares him her Master… and says it’s up to him to save the world.
No pressure.
Rival Dominions vie for power, and they are all far larger and more organized than Jake’s rag-tag group of women, but he has two advantages: the rules of this world are eerily similar to those of Fantasy Tactics Online, and his wildest dirtiest sexual fantasies act as a power multiplier for his all-female army.

Warning: The heroes have intense tactical battles, wild kinky sex, and near-constant flirtation. The villains are disturbing and cruel. If the idea of villains doing bad things bothers you, please do not read books ever, but especially don’t read this one.