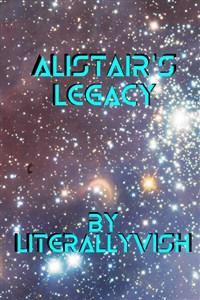 Evie has power unlike the people around her. Where others have various power like levitating objects or controlling elements, she can... well she can make it so they can't. Though she may not be the only one with such power, it is one that sets her apart as someone to avoid. Just the way she likes it.
She was left behind when her grandfather mysteriously disappeared along with her home planet of Earth. Now 10 years later she fends for herself in a vast, vibrant solar system full of people she can’t stand.