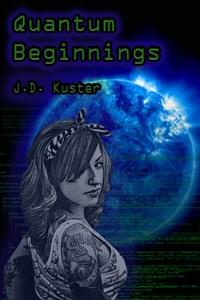 In the near future, a tech-giant begins taking the first true steps of melding the human body to technology. There are those who wish to profit, those who wish to eradicate it and Alex, the unwitting first of human trial for the technology designed to fix his damaged brain.
When Alex awakes from a traumatic accident, he finds himself permanently bonded to a rogue AI due to a twist of fate. He also finds that he’s become little more than a R&D project for a tech billionaire who will do anything to ensure he gets a return on investment. Under threat of being remotely shut down if he doesn’t play along, Alex soon finds himself thrust onto the global stage and at odds against a dangerous anti-augmentation political movement. Enlisting the help of his nurse, an AI that seems to have plans of her own, and a team of mercenaries, Alex begins his play for freedom. From becoming a public shill for a tech corp, to making underground deals to protect his friends, Quantum Beginnings is a ride through the near future of cybernetic enhancements and self-aware AI.
This book contains an anti-hero protagonist, attempted murder, corporate espionage, actual murder, unconventional relationships, hacking, digital drug use, arson, falsification of government records, money laundering, breaking, and entering, misuse of epoxy, sexual content that doesn’t fade to black, and a self-aware artificial intelligence with questionable moral leanings.
For mature audiences. Ages 18+