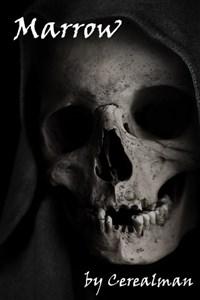 Marrow was old... older than me or you. Older than the nation he lived in. And older than anyone he knew. Which is not surprising, because he did not know anyone else. He had been sitting, or perhaps leaning is the more apt expression, in a closet for many, many years, and had done nothing but stare.
But eating, or rather chewing, a spider opened up another world to him. A world with a voice that was talking to him - to HIM! Marrow did not get what the voice was saying, but that was secondary at this point.
And Marrow started to feel restless.

Nuff said.
If you like a sometimes quirky skeleton as the main character and want to ride along for its coming of age, or perhaps rather coming of sentience story... give it a shot. It is a litrpg context with skills, levels, heroes and monsters... and a skeleton. Not sure yet how fast the skeleton will level... we'll have to wait and see.
As a disclaimer... this is my secondary novel... my main story is ongoing and most of my time is dedicated to that. As such, new chapters will, at first, be rather infrequent and irregular. If things go well, I may shift more attention to the story, but we shall see how things go.