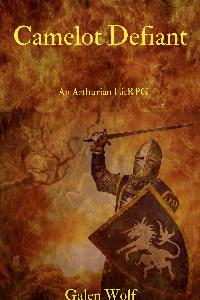 Book 3 in the Camelot Saga.

Sir Gorrow of the Bloody Field has levelled up his dungeon and his town. He has the mysterious smoky crystals looted from the enemy but doesn't yet know what they are for, though he suspects it's something very important.

Everything is going well, except that now the enemy know where he is -- lurking behind his dungeon and he knows it's only a matter of time before they come and get him.

Breaking silence, he finally reaches out to the other Knights of the Round Table and lets them know that he is still in the north, resisting the Evil One.

In this book, Gorrow builds Level 2 of his dungeon, goes raiding to find out the function of the smoky crystals and then when he knows, has to embark on a deadly quest to craft the crystals to their true potential.