Xtreme Manly Man Force of Intense Badassery Book One: The Fountain of Testosterone 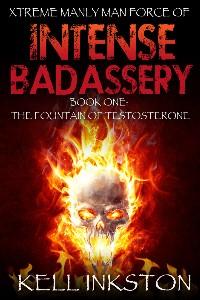 (The Hiatus is DONE. GET IN HERE, YOU NERD.)
Men of the One Million Realms Unite!
A murderous duo of badasses, bound by the spilling of blood and seared in the fiery infernos of battle, angrily part company in search of man’s ultimate holy grail, The Fountain of Testosterone. Rick Durenor, a stoic mercenary, lives up to his moniker – Ultra Death Graveman, while his former partner and kinda-but-not-really friend, Heart Tearer Outer, seeks revenge for a perceived slight that launches both men down a path that neither may return from.
The quest is noble; a crusade intended for the manliest of men, set against the backdrop of evildoers, men with spiders for heads, and cutthroats...and those are the nicer guys. Allegiances are never sure on the road to absolute testosterone driven power – just as Graveman forms a band of likely fierce followers, doubts are raised and trusts are questioned. The bottom line in this fantasy, sci-fi adventure is ‘cover your own ass’ – death is coming, and it may be yours.
Lock and load, raise those fists, and move over, ya' bitch: Intense Badassery punts pussies to the curb and dispatches an all-out assault to deliver death, combat, (disgusting misogyny, REEEEE) and virile audacity.
Oh yeah, and it's definitely not satire, so don't come in expecting social commentary or any other form of meaningful metaphorical dialouge, ya' nerd-ass-dork-butt-wiener-face.