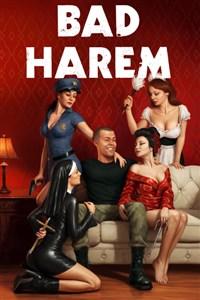 This is the serialization of Bad Harem: The Postmodern Adventures of Kill Team One Volume 5. The story is pretty self-contained, so you don't need to go back and read the earlier books, but everyone wants you to. Jennifer Lawrence wants you to. I heard she said she would go on a date with you if you read the whole series. That's just what I heard. I can't confirm.
What's it about?
It's about everybody's favorite gun-slinging, face-punching, machete-chopping, morally bankrupt anti-hero: Sid Hansen. Sid desperately wants to add womanizing to that list of pseudo-adjectives in the last sentence, but he keeps running into the same problem: women hate his guts. He's tried everything, but every time he tries to talk to a hot chick she ends up telling him to get lost. Sometimes they call the police. Worse yet, Sid has run completely out of money, so he can't even pay for it anymore. He's seriously worried he'll never get laid again.
So when a billionaire puts a price on Sid's head and a cadre of sultry sex-pot assassins come looking to collect, Sid comes up with an idea so crass, so absurd, so unabashedly sexist, and so death-defying, that only he would ever have the steel balls required to pull it off...
It will be a disaster.