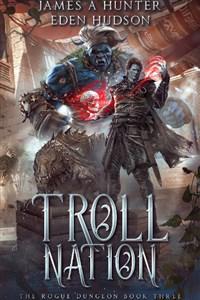 Build. Evolve. Conquer. The dawn of the Troll Nation has begun … Roark von Graf—former noble and hedge-mage, current mid-level mob in a MMORPG—has taken down the Dungeon Lord of the Cruel Citadel, but the battle has only started.
Lowen, right hand to the Tyrant King, has come to Hearthworld and he is building an army of his own, and unfortunately Lowen and company have taken over one of the most powerful dungeons in the game, The Vault of the Radiant Shield. Even as a Jotnar and a newly minted Dungeon Lord, Roark is supremely outclassed and he bloody-well knows it. If he’s going to weather what’s to come and topple the Tyrant King, he’ll have to unlock the secrets of the stolen World Stone Pendant, master his new Hexcorcist class, form some very unlikely allies, and most important ... Grief some heroes. Let the games begin!