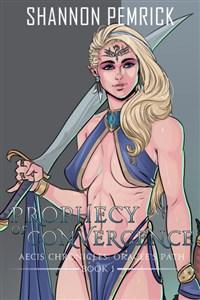 Schedule: Minimum of one chapter a month.
Note: Book 1 will be published in quick succession (3 chapters a week) in preparation for its publication in June. 90% will be taken down at that time due to contractual obligations. Book 2 will continue here on RR, though at a much slower pace to give me some buffer, as I work on a few projects at once (some not suited for the reader base here on RR).
Note 2: This series may end up with a harem/poly relationship later. It's not been decided for sure at this time. An update will come about if it is added.
The Oracle's Path series is not a clean read, containing profanity, violence, substance use, love scenes (including LGBTQ pairings) and other adult situations.

The twisted dragon queen stirs… Half-elf Oracle Aviana is no stranger to prophecies. With a strong connection since birth to the dragon god, Akorith, the dissonant whispers of fate have followed her from the beginning. And when an ominous warning foretelling of the destruction of her clan comes her way, she isn’t sure what to make of it. But when her younger sister needs to be prepared for her coming of age trial—a task that will test the woman’s fortitude and innocence—Aviana is the one tasked with showing her the world outside their secluded town. Her hands full with her sister’s childish nature, a foreboding prophecy is the last thing Aviana needs on her mind.The signs of the prophecy, however, appear: pirate attacks, a fight with a dragon, and crossing paths with a cheerful dwarf and stunted, lecherous elf—and Aviana can’t ignore them. Things go from bad to worse, and she’ll have to trust her intuition and the most unlikely of allies to make it through, or the world will be plunged into chaos...