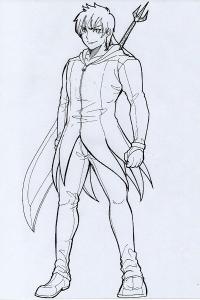 This world is known as Athiem. Many strange things exist in this world but one thing stands out the most. Well five things to be exact, this world revolves around five different forms of energy. Magic, ether, nature, primal and dragon. These forms of energy are used for everything, from powering peoples homes and cities, to growing food and creating technology, but most notably it is used for fighting arts. Most of the people in this world are born with one of these types of energy within them, while some don’t. Somewhere on the eastern continent, hidden away in vast unending wilderness lies a village. This village is home to one young man who will have his whole world change faster than he can keep up with. This young man is named Pyre. He has spent the last twelves years of his life training to become a master swordsman in his village. Pyre obtains a strange music player that grants him insane levels of power when it plays music. Upon gaining this power, a voice speaks to him telling him that there are two others with this power that he must find in order to stop a great evil.