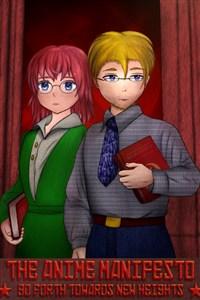 The world used to be a better place. People used to go outside to explore the world, finding new discoveries, creating new inventions, and making progress for all of humanity. That is until ANIME was created. The abomination known as anime has infected the minds of many people in the world. The world degraded. All because of the capitalists that created anime. Now they have created the Ultimate Anime, making most of humanity into capitalist zombies that infect the proletariat into buying into their memes and shows.
This is the story of May Florentine, a regular hardworking college student that began to question everyone around her on why they watched anime. Everything made sense to her after reading the book "The Communist Manifest." She carefully studied this book when one day, zombie-like people began to attack their university. It is up to her to cure the world with the only weapon that can destroy these zombies, Communism.