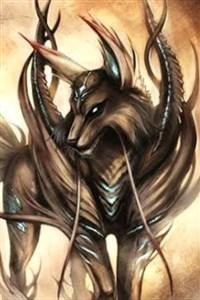 Lycan only wishes two thing in his life. He wants some quiet peace and safety of his mother. BUT! All hell will break loose when his past comes haunting him down with a gentle knock on his door, and when I say that I mean literally past comes knocking on his door, or in his case past comes knocking down his mailbox!But what happened? Why all hell will break loose you ask?Because more than 1 million people from earth got their concisioness trapped within a game which he used to play in past. So there goes his dream of peace out of the window!Then comes a man in a back suit, threatening him with his mother's life, so safety of mother goes out of the window too!Now when he got himself stuck inside that game, which turned out to be a real world in different dimension, along with 1 million players, what's he going to do?He already know that he's a reincarnate individual with his memory sealed for some reason, and he also know that not only this other world is real but also have living and breathing demons and gods along with the mythical monsters! But as if all of this was not enough to turn his already white hair into a colour which even he can't think of, he also know that this world is at brink of collapse because of ongoing war between gods and demon over an artifact call [The Amrit]But knowing all this won't solve anything and when he stop to think about all the ancient mysteries and myths of this world, the first and most important question he ask himself is..."Just what the hell I'm going to do?"Other Synopsis :Tales never die for they're passed down from generations to generation!Mostly because there are entertaining but partly because they are a little bundle of ideas, carefully packed into a gift parcel by our ancestors as a present for us future generations. They hoped to pass the torch, they hoped that we'll learn, they hoped that we'll understand what they meant even long after their mortal shells vanishes with a gust of wind along with scattered sand right into the river of time. The river which never stops for a male or for a female, not for a man or for a beast, neither for a living nor for the dead, even mythical gods and demons succumb under ruthless current of this heartless river of time.This is a story about a boy who picked such a tale from this river and the tale was about a wolf!The boy was so inspired by this tale that he thought like a wolf and fought like a wolf, until one day he himself turned into a wolf and eventually got his own tale called 'The White Wolf!'