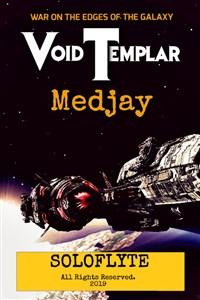 Writer's Note
Hi. Soloflyte here. The story falls into the Space Opera genre, one which I wanted to explore. I did notice that there seems to be a lack of pure/original science fiction stories on the site, and I hope the story would encourage readers to try out other science fiction stories.
I do have two active stories as of now on RRL, and because of that, updates to this story would only be on a weekly basis. I'll try to come up with more chapters, but no promises.
-oOo-
SYNOPSIS
“THEY SAY THE COSMOS IS A VOID,DISTURBED BY A FEW ISLANDS OF MATTER.THEY’RE WRONG.”– CAPTAIN ELRIC MAIN OF THELIGHT SECURITY CORVETTE MEDJAY

In the far future, mankind's destiny in the stars would be written by corporate interests. After the devastation of Earth's resources by human exploitation and excess, governments proved powerless to repair and reclaim humanity's homeworld. Only giant corporations had the technology and the resources to do what was required. In return, the right to explore and exploit the stars were granted to them by governments already under their control. But cutthroat politics and deadly rivalries continued to remain constant staples of corporate greed.
The stars now belong to them. And the continued absence of sufficiently advanced lifeforms made the intense competition deadlier and more avaricious. The Milky Way galaxy was but a stepping stone for corporate expansion. Nothing stood in humanity's path.
An arrogant assumption soon to be shattered.