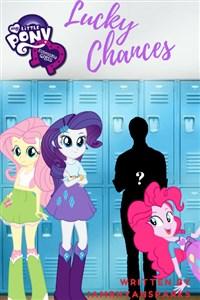 I wasn't minding my own business really. Truth be told, I was just a child when I saw the show. But, further on I started to think back on the new world introduced in that Equestria Girls film. All was well in my life, new friends, new adventures... until my accident on our first group camping trip. Unfortunately, I awoke with amnesia, so I had no recollection of how I'd even survived the accident. I had no idea where I was either, as I was extremely disoriented when I eventually woke up. I didn't see my car anywhere, which scared me a bit.
It wasn't until I noticed the sensation of where I am... to where I once was. I panicked harshly when the world looked different to what I thought I was used to. I found myself making friends with some local school girls.
They felt familiar, just like the world, but I had no idea who they were. All I could do was trust them, thinking that I'm a part of this world now.
But I get the sneaking suspicion that I'm not welcome here, or that I'm not supposed to have powers.