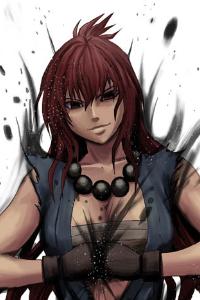 One day two god summons Homura Sadashi and her classmates. Then sends them to fantasy word as heroes except her because she insulted one of two gods. Because of that she didn't sent as a hero but reincarnated as small imp in a dungeon. She did received cheat but not from two gods.

All of her classmates can shoot fireball, send sword wave, summon companion, create army, summon modern arms and control weather it is amazing but only thing Sadashi need is her fists