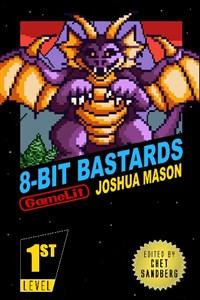 When you've maxed out your level, done every quest, and defeated every enemy, there's not much left. So after seven centuries of immortality, Sean wants nothing more than to die. Afterall was touted as a paradise, an afterlife where anyone could pursue their interests, from archery to zookeeping. The gaming in Afterall was the stuff of legend, but for Sean it had grown stale.
But when a woman from a past life informs him of a real, flesh-and-blood descendent that has hacked his way in, Sean finds a new purpose. The AI doesn't take kindly to interlopers, and parks the intruder in the one realm so buggy that even the oldest, most powerful denizens of Afterall steer clear of it - the Bitrealm.
Sean must enter a land created for the original gamers, people like him who cut their teeth on some of the first video games released to the public. Will Sean brave the pixelated wilderness of Bitrealm to rescue his lost kin? Or will he fall victim to the force that has been making people vanish? One thing's for certain, he can't do it alone. He's going to need a few members of his original guild.
He's going to need some Eight-Bit Bastards.