March of the King 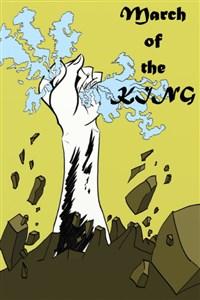 The Rule of Albion, a videogame where you raise your city, recruit your army, expand your lands and conquer. A game like a thousand others, brimming with magic and monsters, ends its' Beta test by sending out a message; a call to arms inviting the game's five-thousand players, five-thousand competitors from across the world to fight, to challenge the tournament to face 'the trial of the king' and vie for the title "The First King of Albion". As the final battle begins, only fifty lords and ladies of Albion remain their armies of heroes and angels and dragons gathered before them. But amongst there number there was one who commanded no heroes, who led no soldiers, but who fought with a horde of monsters at his back for one reason and one reason only not to win but to prove them wrong; his name was Garde.
The battle begins, but as the war ends and the first king of Albion is crowned, those five-thousand competitors, those five-hundred challengers take their last breath upon the earth, and their first step in the world of Albion and so begins the march of the king.