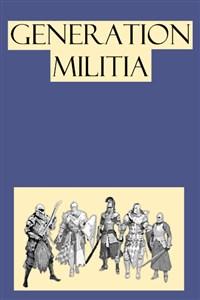 In a fantasy world, there are many who go off and become prominent adventurers, majestic kings or queens, master the arcane or even become the greatest villain of the generation. But when Theokritos Martell failed in all of these things, he dedicated his life to protecting his home village. Follow Theokritos and the Martell dynasty as they serve as the one job with excitement that adventurers, nobles and mages alike all end up falling into when they hit the bottom of the barrel: members of a town militia.
Generation Militia is a low-fantasy world that is intended to be told as a "generational" story. This means it will feature various lead characters as they live their lives -- sometimes pitifully short or majestically long -- and deal with the various incidents one might expect from a medieval fantasy town. Did a group of adventurous murder-hobos roam into town? They deal with them. Did someone steal a sweet roll? Call the town guard! Viewers will have partial interaction once in a while that will help the audience potentially shape the setting primarily through town residents and the situations that the Martell's deal with. This story will be a series that receives bi-weekly chapter drops. These primarily will be single chapters but may include others as time allows.
Some tags -- such as Harem, Female Lead, and Non-Human Lead -- may not appear in the initial story/synopsis but will most likely find their way into the story as you read. Readers can determine which Martell is currently alive by a chapter's title and opening statement.