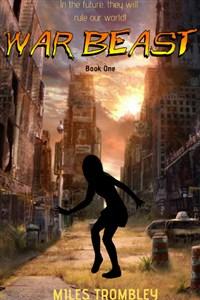 Jenny Summer is a high school student who doesn't get along with the other teenagers. The only friend she has is Eddie, a dorky typical boy, but he is very nice. One day, they go on a field trip with their science class to Thunder Tech, a corporation that builds new inventions for the public. When they watch Walter Freeman, the CEO of Thunder Tech, test a time machine prototype, the machine goes berserk and sucks Jenny into the time portal. Jenny wakes up and finds herself in the distant future where human civilization fell, and the world is ruled by half animal, half human savage tribes, called Beastmen. By luck, three beast warriors, named Huntar, Zena, and Torag, rescue her from danger, then they tell her they are from a clan, ruled by her father. They surprise Jenny that her father is alive, and she joins her new friends on their quest back to her father's tribe. But trouble finds them when an evil ape warmonger, named Horde, has the desire to take a powerful relic from Jenny’s father to conquer the entire world. To survive, Jenny must help her father’s warriors save the world before it is too late. Will she survive in the strange magical post-apocalyptic future, or will she become prey? Welcome to the world of War Beast.
Note: This my the first draft, which I have been working on for years. It has been through a lot of changes until I finally decided on what the setting will be. Just to let you know, the profanity and gore are mild in this draft. It will have no F-bombs, but there are blood and a few bodies being dismantled in battle scenes. There might also be some grammar errors I missed. I hope you will enjoy this story, which I will post between 6pm and 10 pm each day, except on the weekends.