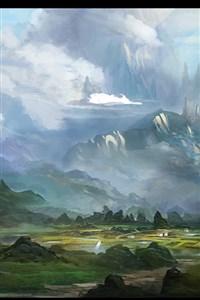 It's a classic premise - an eccentric billionaire with nothing to do. One, at least for now, lacking grounding in real life. However, in 2187, a few people would beg to differ.
Such as Chaisi Anantasu, recently-turned 21-year-old who was lucky enough to inherit the tremendous fortune of a long-lost actual Nigerian Prince uncle, Abaeze(which Chaisi was quite surprised at, given his previous notion of his complete Asian heritage), without any of the usual drawbacks: a failing business he has to support; old friends wanting a slice of that pie that Chaisi has to stave off; or a single footnote in his uncle's will that details an old failing of said uncle, that Chaisi will now have to attempt to complete for the now-deceased Nigerian prince. No, none of that anywhere to be seen...
In fact, Chaisi's uncle was apparently quite a loser. An heir to the throne(only in name, he was far overshadowed by yet another Nigerian prince, his brother Adebiyi), he comletely lost that battle, but was compensated with a "small" amount of money for the prosperous family, yet enough for the former heir to live out his days in complete luxury. Chaisi's uncle was also completely severed from his family tree and thus the royalty, in proper modern Nigerian fashion. This, to most, would seem a bad thing, but to a loser like Abaeze, this only meant permanent avoidance of the responsibilities he otherwise had. The combination of all these factors resulted in likely the richest man in the world who also had nothing to do, Abaeze. And when he died, all that money was transferred to Chaisi Anantansu, a distant nephew and his closest remaining family.
What did that mean?
Well, Chaisi was also quite a character. As a true-blue martial artist, one raised in Thailand with highly proficient fighters in both his father and mother, and later brought to a Shaolin Temple, Chaisi was both extremely talented and, well, lazy. The qualities ended up balancing each other out, and Chaisi gained a high level of skill through forced non-stop training, until 18, where he finally moved out, back into America where he had visited a few years prior with his parents, and joined a large dojo as a teacher, his skill resulting in rather good pay. This continued for three years, until a huge sum of money just appeared in his bank account. Immediately, Chaisi quit his job and purchased a large apartment in the city. But as a billionaire martial artist, with nothing to do, what comes next? A life of pure leisure? No, however lazy he was, Chaisi was not cut out for that.
Luckily, an answer came in the new virtual reality game, Land of Chaos.
Update schedule: One chapter every Thursday and Sunday.