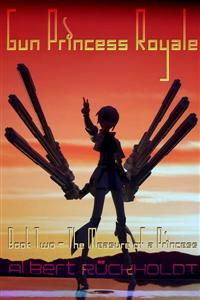 The story of Ronin Kassius, a male 1st year high school student living on the colonized world of Teloria, who finds himself an unwilling participant in the Princess Royale Tournament, where competitors known as Gun Princesses battle for the title of Gun Queen, and the right to compete for the vaunted rank of Gun Empress.

There is a saying there is no point crying over spilt milk, but for Ronin Kassius living on the terraformed world of Teloria, his decision to help out the Cosplay Club during his third year of middle school at Telos Academy in the city-state of Ar Telica is one he fervently regrets. Cross-playing as the popular animated heroine, Princess Silver Blue, garnered him a legion of ardent fans misled to believe he is a girl and not a boy because of his overtly feminine appearance.
A year later, Ronin begins his first year of high school at Telos Academy hoping for a change for the better, but his life is soon derailed in a series of mishaps that appear suspiciously intentional. An unpleasant after-school encounter with a girl bearing a grudge threatens to expose Ronin's cross-playing days as Silver Blue. Escaping into a gaming arcade for a session playing Necropolis - a zombie apocalypse holo-VR - turns into a fight for survival ending with his apparent death. Waking up days later, and fearing the consequences of attending Telos Academy if his secret has been exposed, Ronin learns it's the least of his problems when he's challenged by an unknown party to dress as a school girl if he wants to learn who revealed his cross-playing identity and the truth behind his demise in Necropolis.
Helped by three female classmates, and guided by an enigmatic voice in his head that he nicknames Ghost, Ronin faces twists and betrayal as he struggles to learn the truth about Necropolis, his body, and the mysterious family that has chosen him to represent their interests by competing as a girl, Mirai, in the Princess Royale, an all-too realistic VR tournament where Gun Princesses battle for the coveted title of Gun Queen, earning them the right to challenge their competitors for the ultimate rank of Gun Empress. However, the greatest shock will be learning the truth behind his new existence as Mirai, the reality of the Princess Royale, the powerful Sanreal Family, and what it all bodes for him, his family, and for humanity living on Teloria.