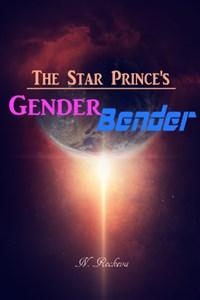 Gender Bender has three loves: men, flying cars, and crossdressing. It’s the age of intergalactic travel and supernatural powers, but she wastes her days chauffeuring the pompous elite from foreign planets to drone-infested cities, towering skyscrapers, and floating districts. When a certain handsome jerk attracts a flock of assassins and destroys her vehicle, she hatches a plot of vengeance: flaunt her hidden curves, seduce him, then ruthlessly break his heart. But what begins as a small lesson soon spirals into something much greater than the galaxy. Classified secrets and a forgotten past... Will she still find love?
Star Prince Aether Maelstrom is cold and aloof. His grandmother wishes him to marry a woman, so he strikes a deal with a mysterious Sparrow driver to supply him a fake date. He thought it was foolproof, but when the battle-hardened prince discovers the driver’s true gender and sexuality, the unthinkable happens. His heart thumps and the coldness melts. He wants her and only her. But to have her, he finds he must first surmount two obstacles: his fake girlfriend and the succession to the throne.
———
Aether held a large bouquet. “For you, handsome.”
“I’m not stupid,” Gen said. Dressed as a male aura knight, she spun her plasma pistol and gave a cocky grin. “Oleander, a deadly flower. Who are we killing?”
“It’s a bouquet for the one I love.”
“No, really, man. Who are we killing?”
“...”