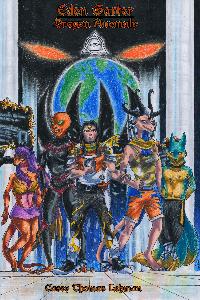 2002 - Martial Law has been declared only short while after the sinister assault upon the twin towers on September 11, 2001. Eden Garter is a 23-year old mix-racial young man who has been selected to be part of an 4th-dimensional group battling against the infamous "Illuminati". Now that the shadowy organization has begun to take over his universe, he one of the only people who can stop them. With his allies, Hinata Dyne, Opal Kindred and Densetsu Kusanagi, he is determined to use the Dragon Glyph to annihilate the puppets, drive back the Illuminati and in turn avenge the ones he held so dear. Over the course of his first adventure, relationships will form and shift, and the hearts, minds and souls of all involved in the conflict will all be tested.