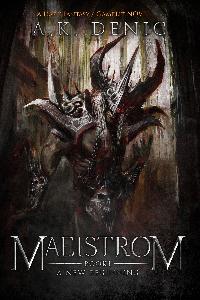 When Kaden first meets Laney, he is spellbound by her mesmerizing beauty. She is, quite literally, everything he always dreamed of. But Laney has a fundamental problem and she’s about to make it Kaden’s too, as his life is suddenly turned upside down.
Laney is a fallen angel and the daughter of Lobos, a God who is very pleased to meet him. Finding out the truth about his nightmares and appearances of the beauty in his sleep, turns into something he would never have thought possible. Now the deity gives them one last night on Earth, which Kaden will spend with Laney.
Waking up, they find themselves in a world created purely for Lobos' enjoyment. Kaden, accompanied by the banished Laney, soon finds that everything in this harsh new world wants to kill him and it doesn’t look like he’ll stay alive very long.
An unexpected encounter with a king from another plane of existence provides the two with an opportunity for revenge. With his help and an alliance of races fighting Lobos in another dimension, Kaden has a chance to survive when all the odds are against him.
But can he overcome the many dangers he’ll face along the way after being separated from Laney and his new friends? Will he ever return to Laney and live his life in peace once more? Or will he die like a pawn in Lobos's game of pleasure?