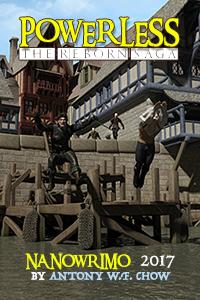 What happens when we die? The answer to this question becomes personal for a teenage boy who named himself, "Smendrick," when he is reborn on a world named Sanctum. As a Reborn, he is thrust into an unforgiving society splintered between the Gifted, those blessed with Aether-fueled Powers, and the Powerless, who are treated as outcasts and pushed to live in the dangerous Recovered Land.

When the system decides that Smendrick has no hope of ever becoming a Gifted and casts him out as another Powerless, the teenager decides to leave Rezdi City and seek his fortune as a Scavenger in the wasteland known as The Shar. There, he makes a discovery that will change his life as a Reborn forever.

During his journey from Rezdi City to The Shar, Smendrick is plagued by dreams and memories of his past life. Who was he before he died and was reborn? How will these revelations affect his new life as a Reborn?

POWERLESS: The Reborn Saga is a science fantasy LitRPG story written for Nanowrimo 2017. The work contains strong language and it is recommended for older teens and up.