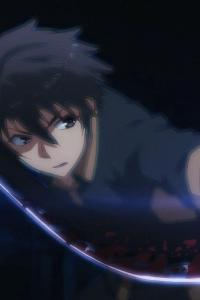 After Earth was devastated by a cataclysmic event known as The Tremor; 60% of the world's population was culled, and the remaining 40% that was left alive now had the job of rebuilding and repopulating the earth. From the ashes left behind from the destruction, rose a marvelous city known as Arkis. And in Arkis, the collective government: known as the Organization, built the University.

The University houses many special individuals, some who can move objects with their minds or, who read the thoughts of others, but more specifically, young people known as Hypers. Students of the University, training to become Arkis', and the world's, protectors.

While sporting many kinds of psychic abilities, the Hypers are also able to turn into different styles of weapons, able to be wielded and grant the user superhuman abilities. Those that team up with Hypers and form teams of two to fight rouge nations and mutants outside the boundaries of Arkis are called Duelers.

Damien Arbel is a Dueler in training, starting his first year at the University. Along with his friends, he will fight against many powerful enemies, seeking to bring chaos back to the world and will begin to unravel the dark secrets behind the Organization.