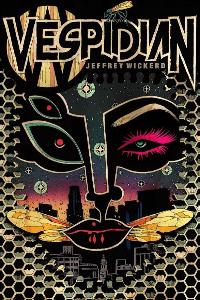 This is the story of Vesper Walda Vasska a normal girl, who... ok, who am I kidding? She was a bit weird to start with, what with her love of nerdy things in general and her fanatical following a very questionable and very manly man show known as the Moon Sailors. She totally doesn't watch it for the hot man on man action that would drive any girl wild.... It feels like I got off topic.

Deprived of her life support (the internet) one day she ventures out from her parent's basement into the outside world. Only for things to go horribly awry when she is exposed to a virilent concoction known as Mutigene and her life changes forever. She gains superpowers, but at a price. Vesper mutates into a monsterous wasp creature, though her mind remains somewhat intact. She struggles to suppress her new instincts and hold onto her crumbling humanity, joining the ranks of the other extraordinary people known collectively as Supers. The so called Heroes and Villains.

Thus starts her adventure through the mysterious, dangerous, fantastical, sometimes silly, and at times down right insane world of Supers. Will she claw her way out as the Hero Bronson City needs or will she give in to her darker half and become the Villain Bronson City dreads.

(18+ gore, sexual content though not particularly descriptive of the acts themselves, cursing, drug use, yuri, yaoi. implied rape in various forms, mental and physical.) Erotica Chapters will be labled as such and have a warning of the content at the start.

Trigger Warning: There is a lot of satire and parody in this story so take it with a grain of salt. Just about everything gets poked at once or twice in here. This is a parallel reality after all, so though things seem similar to our own world they are very different in many ways. Also, there is a bit of politics, however I am editing it down, though that will be a process so I have not gotten to it yet. But I am aware of it and am working on it.