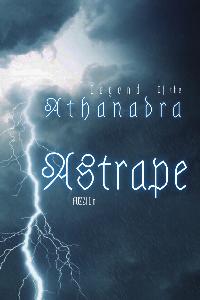 ::BOOK I OF THE Legend of the Athandra SERIES::

❝There is more to the world than you think there is.❞
To the Humans, Pelbatia was their Goddess who brought them out of the savagery of the land and into a unified empire called the Upotia. No other creatures could outmatch the superiority of the Humans.
❝Your blood runs much deeper than you think.❞
Zea Sarwyght has never known her parents or what lay beyond the borders of her home. Zea never knew why a blue stone came to her that fateful night, and even more bizarre, why a Dragon had hatched from the stone.
❝Some legacies aren't meant to be lost.❞
When a praying ceremony goes terribly wrong, Zea finds herself on the run with a grumpy coach, a jaded man with a few moral lines left to cross and a hidden agenda to fulfill. As she tries to string together the history--the real history--of the land, she discovers a previous life she never knew she had, and the truth about the Dragons.
❝A storm is brewing.❞