Dead to the World - Sacrifice 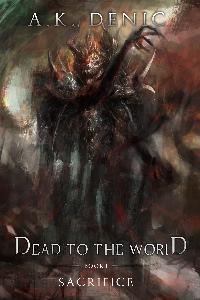 Barely surviving his latest monster hunt, Kane finds himself in a strange position. In a world of magic, monsters and everything one can imagine, the unimaginable happens as his soul is torn in two. One half manifests through a massive wolf, Alpha and the second through the evil within him.

What is even worse, during an unwelcome encounter, a demonic soul is awakened within him, planted there for a sole reason. The destruction of everything. Will an enexpected love be enough to keep his bad side under control? Or will the demon manage to take over and lay waste to everything that he has come to love and cherish?

Dangers keep stacking against him as he is thrust in the middle of a war. Death will only fuel the monster within him. Will his sacrifices be enough to keep it from unleashing hell or will he succumb and destroy the world with his own two hands?