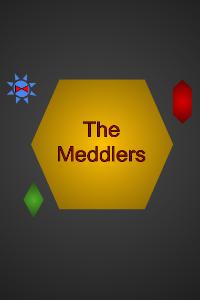 Synopsis should be read as if you were a narrator for an action film
In a world where dragons fly and armies crusade, one idiot struggles to stay alive against the most mundane of foes, such as hunger, shelter, and goblin-made-grenades. Our her- erm, protagonist? Yea, that works- Our protagonist will explore dangerous lands, fight terrible foes, "rescue" confused maidens, and have one fatal cliffhange- What? I wasn't supposed to spoil that?
Well then, it shouldn't have been in the script!
No, I will not start from the beginning! My throat already hurts from doing this stupid voice.
No, you read the script! I'm done.
The narrator leaves the recording booth as the door closes behind him with a "click"
...
...
Door opens and then shuts as narrator returns to the microphone
The Meddlers, written by Isaac Greyfield and narrated by (insert your name here).