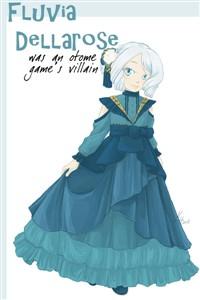 Full Title:Fluvia Dellarose was Supposed to be an Otome Game’s Mini-Boss Villain, but Her Strong Maternal Instincts Prevailed! – As Expected of a Former Single-Mom.
Main Site: https://honyakusite.wordpress.com/fluvia-dellarose-was-an-otome-games-villain/(Illustrations and the latest chapters - and a more aggressive update rate - can be found on the main site)
In the otome game, [Love that Breaks Bonds], Ryllia Piermont is one of the main rivals, a villainous woman who seeks to devour marry a man of high-standing to gain power despite already having a fiance. Blackmailing, threatening, and tricking her way through the story, the person who made it all possible for Ryllia was the sickly Fluvia Dellarose, the younger twin sister of Ryllia’s naive and arrogant fiance, and a secret wielder of the illegal Ghost Arts.
The tragic sub-villain, Fluvia Dellarose’s life went something like this:1. Lose magic2. gain Ghost Arts3. build the family estate up based on blackmail and illicit knowledge4. get sweet-talked by Brother’s fiancee5. become devoted to Ryllia6. orchestrate many of Ryllia’s dirty deeds7. get thrown away by Ryllia8. attack the Heroine9. get executed when Ghost Arts are found outThat’s how it was supposed to go, but…
Mother, Father, properly scold your selfish son! Do you mean for it to become a habit?! Brother, I will raise you into a good man!Hmm… Mother has an inferiority complex so she doesn’t like socializing? Very well! I will turn the areas of yourself you hate into those you take pride in!Eh? There’s movement in the dark underbelly of the city that must be dealt with? … And just what are you going to do if my naive father hears of it? Bring the reports to me!
Ghost Arts? Hmph! As if I would learn something illegal! Do you have any idea what kind of influence I will have on the children(Mother/Father/Brother)?! You don’t understand just how easily influenced these people (my precious, adorably foolish family members) are!
Besides why should I, who was spurned by love and had to raise my child all by myself in the previous life, follow some sort of love-story script in the current life?
In this life, I will live to see my grandkids this time!