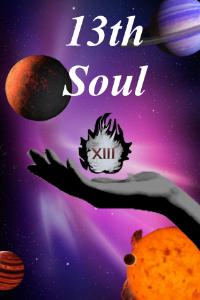 13th Soul
In the beginning, there was nothing but darkness. Through someone's hands that all changed and the universe began. Fate was going as planned and the first twelve souls of the universe were given their paths to be followed and set free into the universe. Before the other normal souls could be set free as well something or someone interfered. A soul different from all the rest was set free. It was a soul free from fate and free from anyone's plans. This little soul was The Thirteenth Soul.

Book 1 The God Slayer
In a young world in the young universe, there was the Lemuria kingdom. On one day the first princess was born but had lifeless eyes and was not breathing. Her parents were about to give up when she started to breathe again. This is the story of a little soul that took its first journey as Eva Lemuria The God Slayer.