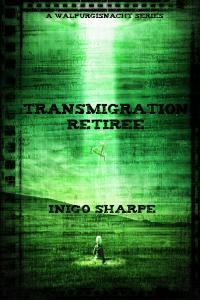 "What's that you say? I can never leave this reality ever? Good!"

Ed, was a normal man in a world full of superheroes, so he didn't really have too many complaints when that first truck fell on him. After all he'd read enough comics to know that sometimes things just happen. Besides he'd been getting on in years when it happened, and his life till then, though lonely, had more or less been fully lived.
The second time around when that one guy pushed him off a cliff for a chalice of immortal ambrosia, wasn't so cool though, and then there was that third time when he was just getting used to life as a lady, and that crazy goddess showed up out of nowhere and started ranting about purging the demon menace....then some other stuff happened and he briefly got to go back to earth before falling into a coma where he adventured in the world of dreams.
Then the aliens came, and the dream ended and he was suddenly stuck being the AI Overmind for the whole damn star systm. The aliens died, and because he was all mechanical and what-not he just kind of had to keep on going.
Forced to continue collecting the materials and data from countless worlds that were destoryed in the process.
Then there was that whole war with the gods business that followed...mostly because of all that world destroying he did because of some fairly faulty programming.
Anyway, thankfully someone pulled a "rocks fall" on that whole curfuffle, because by the time he was in control of himself again, things had long gotten out of hand.
Now the powers-that-be tell him that he must spend the rest of his existence in single lonely section of the cosmos. Trapped in a single portion of a single universe. And now he weeps...No worries though, these are tears of joy.

Hopefully this final unending existence he's been given will be the quiet life he's been looking for.

A Man who's seen everything gets abducted by aliens and is converted into an AI that sits at the helm of a fleet of alien ships and behind the computer systems for most their planets. This Alien AI goes to war with the gods and ends up nearly destroying an entire reality. The Angels condemn the troublemaking AI to life as normal child on a far off world....All truth said, the "AI" couldn't be happier. His life's been far too interesting(read: Scary, Inconvenient and Painful) in his opinion and he could do with a bit of normalcy.