Reformat: Adventures of a Battle Academic in a Primitive Land 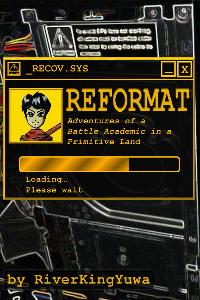 Have you ever thought of starting things over from scratch? What do you want to make of it?
Professor Nicholas King dies fighting against the tyranny of his current government. Supposedly that's game over, but the supernatural intervenes - he is reborn to live a second life in the primitive land of the River Kingdom as Linus Daedalus, of whom many consider a genius, yet for the cautious, suspicious.
Follow Linus in his quest of transforming the barbaric land of the River Kingdom in Reformat.