I hate being wed in a fantasy world! 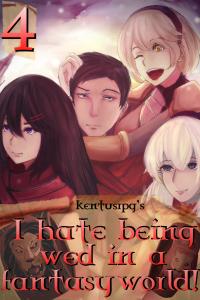 Katsuragi Kenta was a gamer. He did exactly what he needed to obtain the games he wanted and the time to play them; nothing more, nothing less. When his entire class is transported to a fantasy world, Kenta is suddenly an expert on their situation and the world around them. Naturally, he sets out on his own to escape his two faced classmates.Two months later he returns and discovers that Momokawa Kyou, formerly the most popular girl in class, was left behind by their classmates. The two strike up an uneasy alliance despite despising each other. What’s more, they may have to work together to survive a curse.Kenta will have his hands full surviving his new fantasy world. If the monsters don't get him, Kyou just might!

Warning: Tagged 15+ for Sexual Innuendos, Strong Language and Violence.Cover artwork made by MioChin