The War of our Stars 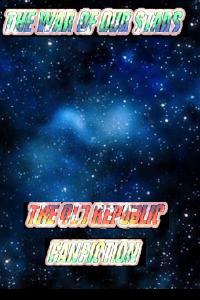 I used glowtxt, Microsoft word, and paint to make that.
I DO NOT OWN THE PICTURE, I got it when I searched up "copyright free".
Also, I just used glowtxt, but if whoever made glowtxt wants me to stop, I'll get rid of it.

Star Wars the Old Republic Fanfiction.
You'll understand the title, not in the first chapter, but as Frederick goes to outer space.

Before the Rule of Two, there were multitudes of Sith and Jedi.
Numbering thousands of both Sith and Jedi, a great war between the Empire and Republic has existed since time immemorial.
From our World, a young boy named Frederick is born into the Galaxy of Star Wars, born into an Imperial Family, he lives up to the expectations of becoming a powerful Sith.
But all he wants to do is to survive....
But by surviving, he does more so than simply surviving.

Many have made star wars fanfictions, and this one will probably......
(I have read, watched and played Star Wars, so here you go)

NOTES: Action and Adventure are a bit light for the first few Planetary Arcs. I'm terrible at comedy and romance will come will really late.