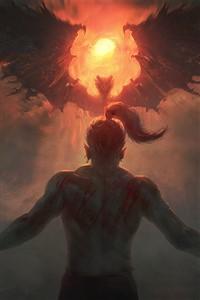 Gods, Demons, Magic, Monsters. All these were things originally believed to only exist within legends and myths, stories far removed from reality. Yet that belief was shattered when a rift in reality appeared and these very things swarmed into the world and laid it to waste. Had it not been for a few benevolent gods and demons that made contracts with people, the whole of human society would have been destroyed. The magic that leaked into the world from the rift forever changed the surviving humans, allowing them to perform unimaginable feats, like conjure vast amounts of flame, or send humongous boulders flying.
100 years after this rift opened, the gears of chaos start moving once more when a young orphan is pulled from the ruins of his destroyed home.