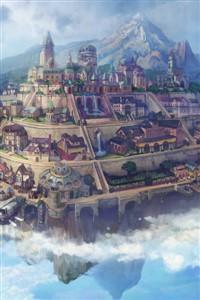 Somewhere out there, in the great expanse of space and time, exist the Fabled Islands. Nobody knows how or why they exist, but only that it is a strange and special place that operates under rules separate from the laws of the universe.

The Fabled Islands are made up of vast floating continents. They vary in size, with some ranging from the surface area of a small planet, to the size of a star. If you look at them from afar, you would find that they are placed in a line. Each island is separated by a vast amount of space, so there is only one way to travel from one island to the next; a gateway on the edge of the island. The gateway is a one way ticket, so whoever chooses to go through it are either brave, or a fool.

Each island is governed by strange rules. The only thing they share in common, is that the rules are governed by the System. The rules change vastly from one island to the next, so you must quickly adapt.

This is the complete opposite of what Tristan wants.

Bring on the monsters! Bring on the magical items! I want adventure, loot, and to put my life on the line! Where are the dungeons, caverns, and mountains to be explored? Where is the mythical equipment to be found? The next island? Then the next island I will go!